Voice of the Shepherd

END_OF_DOCUMENT_TOKEN_TO_BE_REPLACED 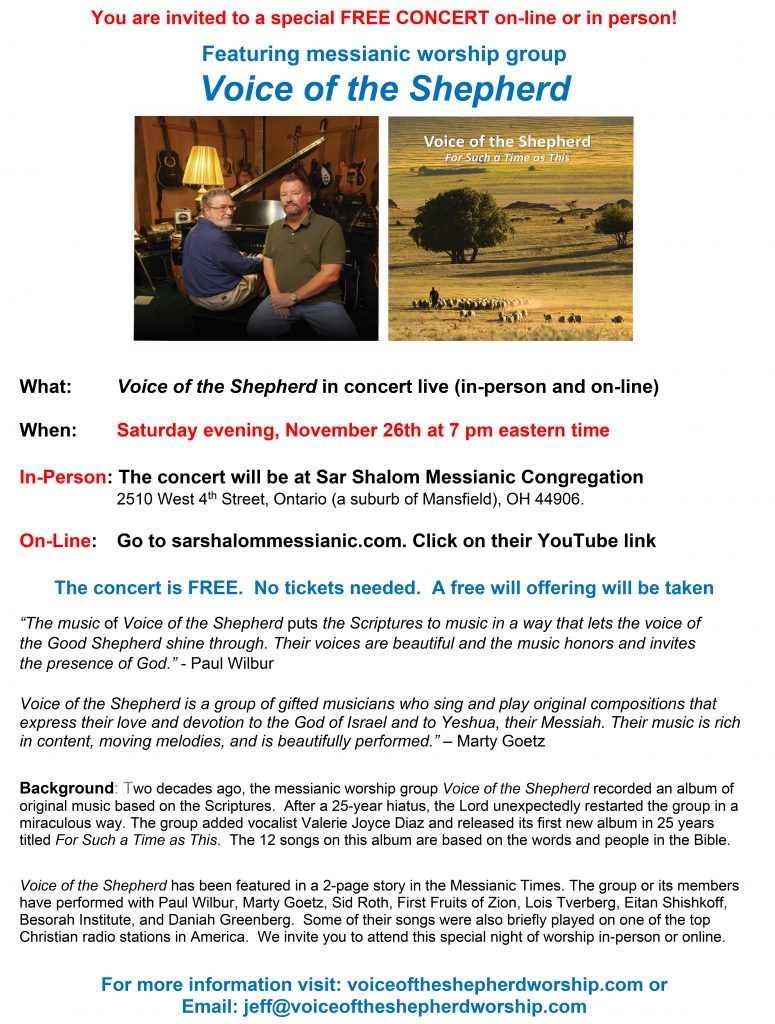 Thank you for your interest in the Scripture-based music of Voice of the Shepherd, a Messianic/Christian worship group.  Two decades ago, the Lord gave the members of Voice of the Shepherd original songs based on the words and people in the Bible.  Ultimately, interest in the music waned and the songs were seemingly forgotten long ago.  But as the Lord says in Jeremiah 29:11: “I know the plans I have for you.  Plans for good and not for evil.  To give you a future and a hope”.  Unexpectedly, nearly 25 years after the songs were written, recorded, and performed, the Lord has chosen to open a door to revive this music for “such a time as this.”  It is an honor and joy to share the Lord’s music with you.

The music you are about to hear was given to Voice of the Shepherd by the Lord as a freely given gift. Therefore, it is our privilege to invite you to listen and download each song for free.  First, there are a few things we would like to mention.

The Lord did not live in an English-speaking society so His Name would not have been Jesus (which means Messiah) but rather Yeshua (salvation).  Accordingly, we use the Name Yeshua in our songs.

We believe the Bible (both the Old and New Covenants) is the true, accurate, and inspired Word of God.  This means that the individuals found in the pages of the Bible were real people, with real lives, and real problems.  Many of our songs were written from the perspective of these all too human characters.  For example, John the Baptist as he encounters Yeshua for the first time in A Dove Flew Down; Abraham as he faces an agonizing decision concerning his son Isaac in God Will Provide; and the unnamed woman whose 12-year issue of blood would have left isolated and outcast as depicted in the song Hem of Grace.

Voice of the Shepherd has done our best to faithfully reflect the words of the Scriptures.  However, our music is a poor substitute for the real thing.  We encourage you to read the actual Bible passages on which our music is based.  Worship leaders and individuals: you are invited to sing or play any of our songs, or use them in a church or worship setting.   We ask only that you don’t record or sell these copyright-protected songs without our permission.

Voice of the Shepherd gratefully offers our praise and thanks to our Lord and Savior, Yeshua the Messiah, who is the real author of our music.  May these songs of hope and healing be an encouragement and help you better hear the voice of the Shepherd.

This website uses cookies to improve your experience while you navigate through the website. Out of these cookies, the cookies that are categorized as necessary are stored on your browser as they are essential for the working of basic functionalities of the website. We also use third-party cookies that help us analyze and understand how you use this website. These cookies will be stored in your browser only with your consent. You also have the option to opt-out of these cookies. But opting out of some of these cookies may have an effect on your browsing experience.
Necessary Always Enabled
Necessary cookies are absolutely essential for the website to function properly. This category only includes cookies that ensures basic functionalities and security features of the website. These cookies do not store any personal information.
Non-necessary
Any cookies that may not be particularly necessary for the website to function and is used specifically to collect user personal data via analytics, ads, other embedded contents are termed as non-necessary cookies. It is mandatory to procure user consent prior to running these cookies on your website.
SAVE & ACCEPT
Scroll Up